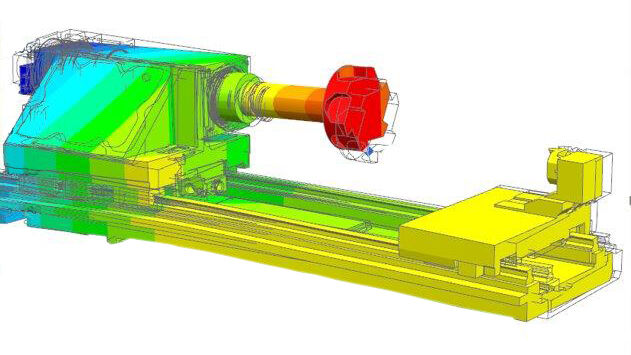 How much strain is placed on certain components of a machine when forces are applied to them? How does the material deform during transport? Do natural oscillations occur during the machining process? The Finite Element Method (FEM) provides answers to these questions. FEM is used to calculate virtual components on the computer to show their static and dynamic structural behavior. For example, deformations, stresses and vibrations under the influence of forces are simulated from individual parts to functional groups and even complete machines.

VOLLMER also uses this type of structural analysis in the development of its machines. The advantages of the process are obvious: the analysis of virtual prototypes helps to evaluate different design methods well before the actual production process, without having to build them physically. This saves development time and costs and allows the early identification of design improvement potential.

How does the method work?

The component geometry is read in directly from CAD programs and processed further. The body to be calculated is then broken down into many (finite) partial bodies of simple form. For example, into many small cuboids or tetrahedra - the "finite elements". This results in a large number of nodes that connect the elements. Each node can deform under load or begins to oscillate and its reactions are propagated into the neighbouring element.

Depending on the material, the physical behaviour of each individual small element, such as the relationship between force and deformation or heat and temperature, can be described by mathematical equations. In some cases, empirical values can also be obtained from measurements on real structures. Consequently, a large number of mathematical equations are linked to each element and each node. And the more elements, the more accurate the result. When calculating our machines we therefore often have to deal with millions of equations. Fortunately, these can be solved with modern computers - even if the calculations sometimes take days.

Our Vlaser 270 is characterized by a unique kinematics. The five axes are arranged one above the other in such a way that the processing of the tool is always at the centre of rotation of the C-axis. In addition to an overall view, the main focus of the finite element analysis was therefore on the axis elements and their interaction in order to know exactly the static and dynamic properties of the kinematics. For VOLLMER, FEM is extremely important: If the development department uses simulation at a very early stage of the development process, potential failures can also be identified at an early stage and improved by design measures. It enables efficient development work and helps to meet development targets, which has an effect on the accuracy and quality of the tools machined on the VLaser 270.